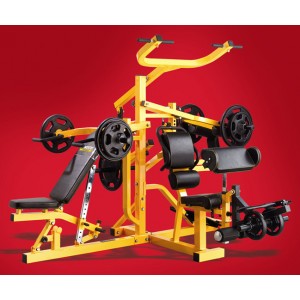 Over the years I have read several times on forums about the wobble associated with the Powertec benches. We even started to get customers coming and raising the issue when checking the bench out. So I have decided to do a video that addresses the issue and shows you how to "tune" your Powertec gym equipment so that it will not only be rock solid, but will also be super smooth to use.

First off I have to say that this bench wobble myth is like a lot of tales that get oxygen on social media platforms like forums etc. In this case somebody noticed that a poorly assembled Powertec bench had a bit of a movement. This was confirmed by someone who also had half assed assembled bench. Next thing you know all Powertec benches apparently wobble uncontrollably.

This was one of the reasons why we have such a presence on youtube. I would challenge such posts on forums and would be called out, so I started to back my claims with video footage.

There is no denying that the Powertec bench does have some lateral movement in the shoulder press position. Most FID benches do. However if you are doing the exercise properly there should be no lateral movement. The base of the bench where all the downward force is being applied during the exerices is solid and extremely stable. When the benches are in the flat position there is hardly any lateral movement at all.

You can remove a lot of the slop from your bench if you follow the steps I have outlined in the video. It is just common sense really, making sure that all the pivot points are tight enough to allow changes between positions, whilst minimising play.

This is a lot easier now that the Powertec benches for years have come with bearings on most points. Older style benches used to have bushes. You could still eliminate play, but you had to a lot more precise with the tightening because it was easy to tighten too much and bind some of the pivot points.

Off the top of my head, benches since 2008 have had bearings. Above is an old style Multi System that bushings for pivot points. The entire linkage design has also been upgraded since this model.

As always, if you can't get your bench right just drop us line and send some pictures and we can sort it out for you.