Recently I participated in the Campbelltown Open 2 which was held in Adonis Athletics Campbelltown. I was gutted with my performance. To put it simply, I did not meet the expectations that I set for myself.

As part of the healing process, I thought I would sift through the bones and work out what went wrong. This way we all can learn from this failure and come back stronger.

The obvious explanation is that I probably bit off more than I could chew by competing so soon after I came back from World Bench Press Championships. In that comp I thought I could have done a little better, so I just wanted to rip straight into training.

With hindsight, I underestimated how much that prep had taken on my body physically and mentally. With a limited time window to prepare for the Campbelltown Open, an extended rest period was not an option, but I could have eased my way back into training.

My gym personal best was 190 kgs and 182.5kgs in World Bench Press Championships – where my performance was hindered by a massive weight cut and long travel. With this in mind I set myself a goal of 200kgs bench press in the gym. After all it was only additional 5% to my best lift in the gym. On top of that I had board pressed this weight in my prior prep.

At the start of the journey this did seem realistic. However, if I take into consideration that my previous best was 170kgs, a 30kg jump in about 8 months is massive. Especially considering that I was training so intensely with little rest.

By setting my target at 200kg, I was introduced to heavier lifts earlier in my program. My body was still recovering. I was compounding my overtraining issues.

Powerlifting is nowhere near as popular in Australia as it is in my native Lithuania. Aussies are massive squatters and deadlifters, but often not the best in bench press. Finding a coach who can help me with my benching has been tough. At the moment I fly solo.

I get my training programs from the interweb.

For the World Championships I used a heavily bench specific program. The issue with the program I was training by was that it involved 3 days of bench pressing and 2 days of shoulder pressing exercises. That’s 5 training sessions a week focused on upper body movements.

It worked for me the first time around. As I didn’t have time to play around with new programs I took the safe option and ran it again.

But given the short turnaround time, the last thing my body needed was a bench intensive program.

Throughout the whole 10 weeks I didn’t feel like I could do it, but I am stubborn (or silly) enough to keep on grinding. By not shooting for the 200kg mark I felt I was slacking.

It really is hard to work out when to push harder and when to ease it up.

When you are training heavy you are eating heavy. If I didn’t train and eat I would be nowhere near 93kgs. Therefore, I have to force feed myself. After a while I get sick of eating all the time.

For the first part of the preparation I wasn’t eating enough and losing weight. For most of the day I felt great. Being leaner and carrying less weight is so much better than being constantly bloated. But in the weight room you do suffer.

By around week 6, when I started handling heavier weights, I’ve realised that the training cycle did not work as it did the first time. I only managed to repeat my PB in the gym and it did not feel lighter compared to the first time I benched it. 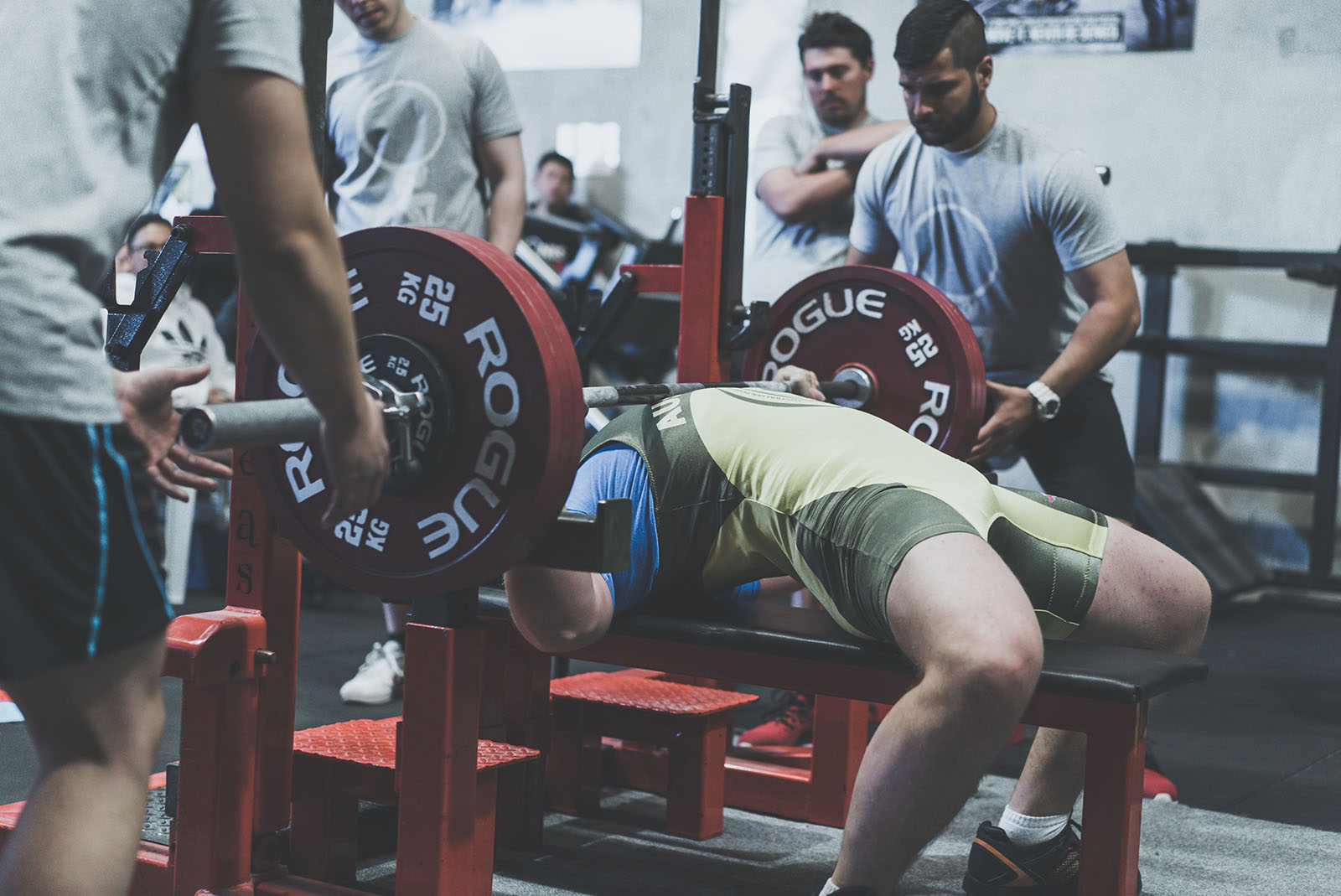 As light as the weight might seem it didn't move much off my chest.

Despite not being at my best I still signed up for the competition. 200kg was off the table, but I believed that I could crack 190 kg. That is when I decided to get plenty of rest. But the problem was that I was sitting at 91kgs. To make the 105kg I had to get over 94kg.

Before the competition I needed to tweak my diet. Nothing scientific here! Just a few large pizzas, pastries, snacks, lots of sugar helped me get my weight up.

On my way to the competition I realised that eating so much junk food wasn’t the brightest idea. My stomach was in pain. Mostly I try and eat clean, so bombarding my stomach with lots of sugar and salt can stress out your digestive system.

On top of that I was quite dehydrated after Saturday. Not from alcohol, sadly. Since I work in the mornings and go to college in the afternoon I occasionally skip lunch. I was operating on a cup of coffee and protein bar. That could have been easily fixed by a better meal planning.

There is no other excuse than being lazy here!

Sometimes the simplest things can throw a spanner in the works. I am still trying to get used to Australian weather. In Lithuania we don’t drink a lot of water. We don’t need to; the battle is to keep warm. In Australia, in summer, I drink a lot of water because I struggle with the heat.

When it is cold I don’t tend to drink a lot – just when I need it. But when you are training hard you need to drink water.

My right elbow was extremely sore. At the time I thought it was just a niggling injury, but looking back it was dehydration. Not drinking enough water drys out your joints.

Not All Benches Are the Same.

At comps you warm up on normal benches. My last two warm ups were 160 kg for three reps and 170 kg for one repetition. They didn’t feel too heavy. I was ready to nail my opening lift. 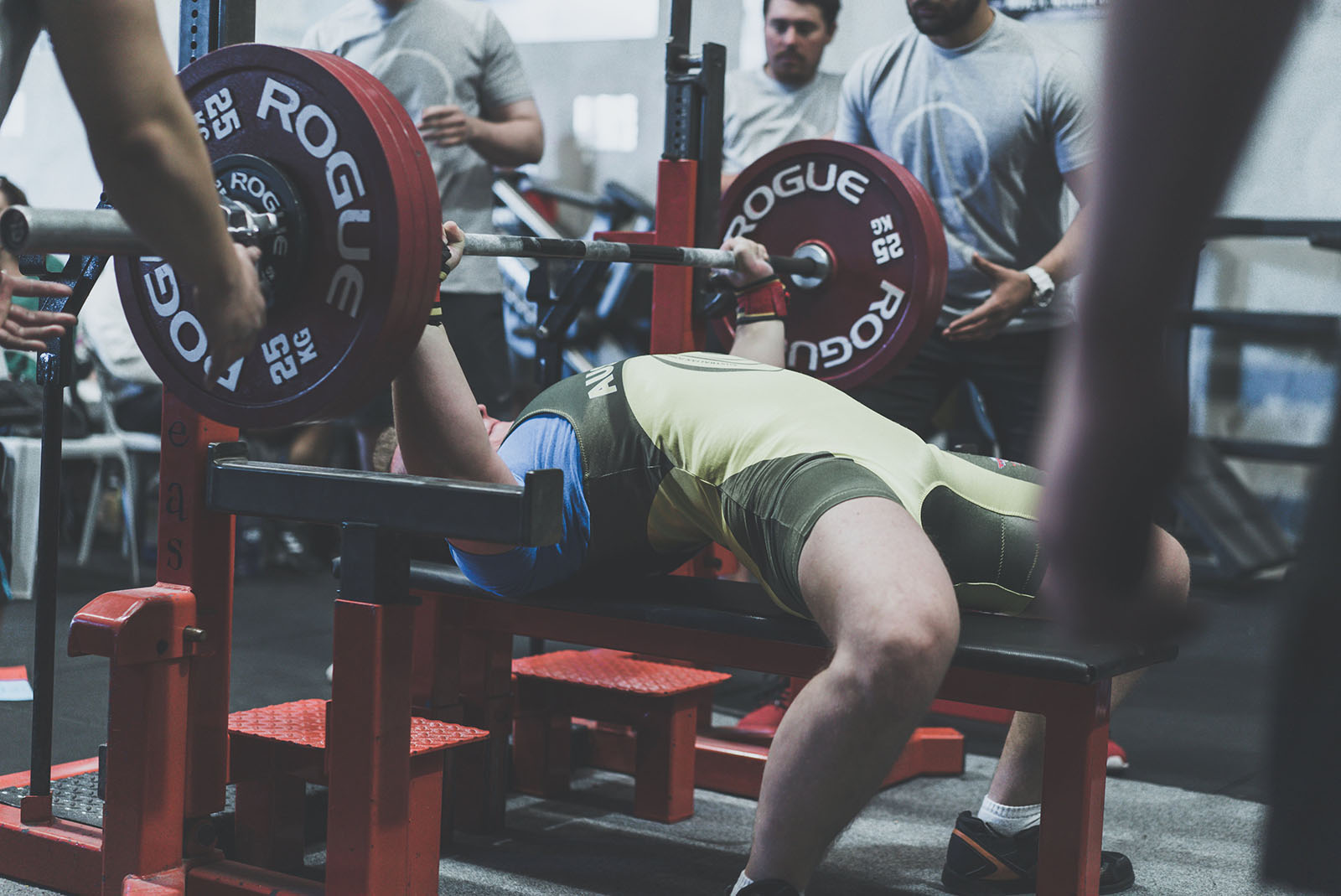 My first lift of the day. 175 kgs which was feeling a tad too heavy.

I called 175kg as my opener as well as the rack height which was 8 D (for Eleiko benches).

The competition bench was a bit different from the Eleiko ones that I had used previously in meets. As soon as I laid down on the bench I realised that the racking height was a bit too high for me. You can’t change it. You just have to lift.

Unracking the barbell at a higher rack height forced me to hyperextend my shoulders and lose a bit of my precious arch. This is what gives me the ability to really drive with my legs.

In future, even if it is an Eliko bench, I will always check the rack height before nominating. When it comes to competitions don’t leave anything to chance.

The first lift did not go as smooth as I wanted it to go. Considering how easily my warm ups went up, I was a bit disappointed. You never know how strong you will be on the day until you perform your first lift.

Warm ups give you an indication. But it is not until you under the spotlight that you will really know how you are going to perform.

This is when I really felt dehydrated. This one lift left me feeling fatigued and my lower back started cramping. My right elbow felt like it had gravel in the joint. Naturally I started drinking water, probably close to 2 litres, but it was too little too late.

As soon as I saw three white lights, I walked to Elliot who was helping me on the day as my coach/mentor Matt “Trunk” Grimshaw was on a modelling shoot, and told him that we will need to readjust the strategy. Realistically 190kgs was off the cards, so for my second lift I would aim for 180kgs. 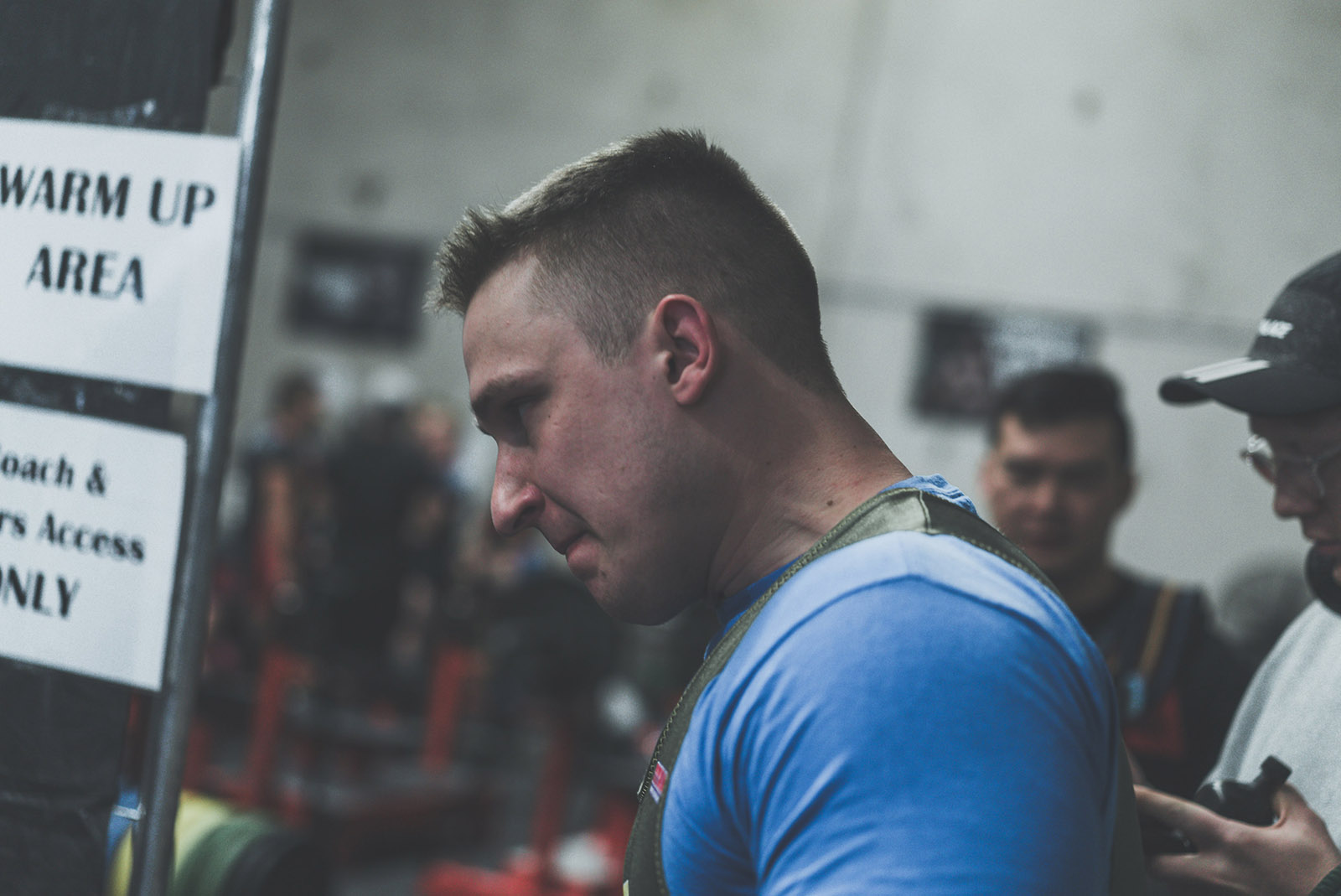 Focused and ready to redeem myself. With Elliot in the background focused on his Instagram likes.

I asked the secretary to change my rack height to no. 6. With the adjusted rack height and my secret weapon – smelling salts – we would skip through 180kgs and then on to 185kgs. Even on a day I wasn’t feeling the best, I thought 180kgs would be a breeze as I had done it many of times in the gym.

After a few minutes of rest, it was turn for me to go again. With a giant whiff of the smelling salts I was pumped and ready to redeem myself.

My set up was perfect. From feet position, grip and arching. But it still wasn’t enough for me get a successful lift.

I couldn’t even get the second lift to the mid-point of the movement. I gave it all I had, but the bar just didn’t go up.

It wasn’t the nicest feeling in the world to fail the lift. Especially after using all my tricks in the book. Mentally and physically I was broken.

This left me with no other choice but to attempt the same weight for my third lift. For a second I thought about just giving it a miss and saving my energy for training. But because I don’t like giving up, I had to try one more time.

The third lift was virtually identical to my second lift. My right elbow was hurting badly. When I went to step on the gas there was nothing there. By then I reckon I had shifted into reverse.

Even though my sole successful lift got me the biggest bench press in the competition by about 20kgs it was a real dog of a day. My performance was well below my potential. 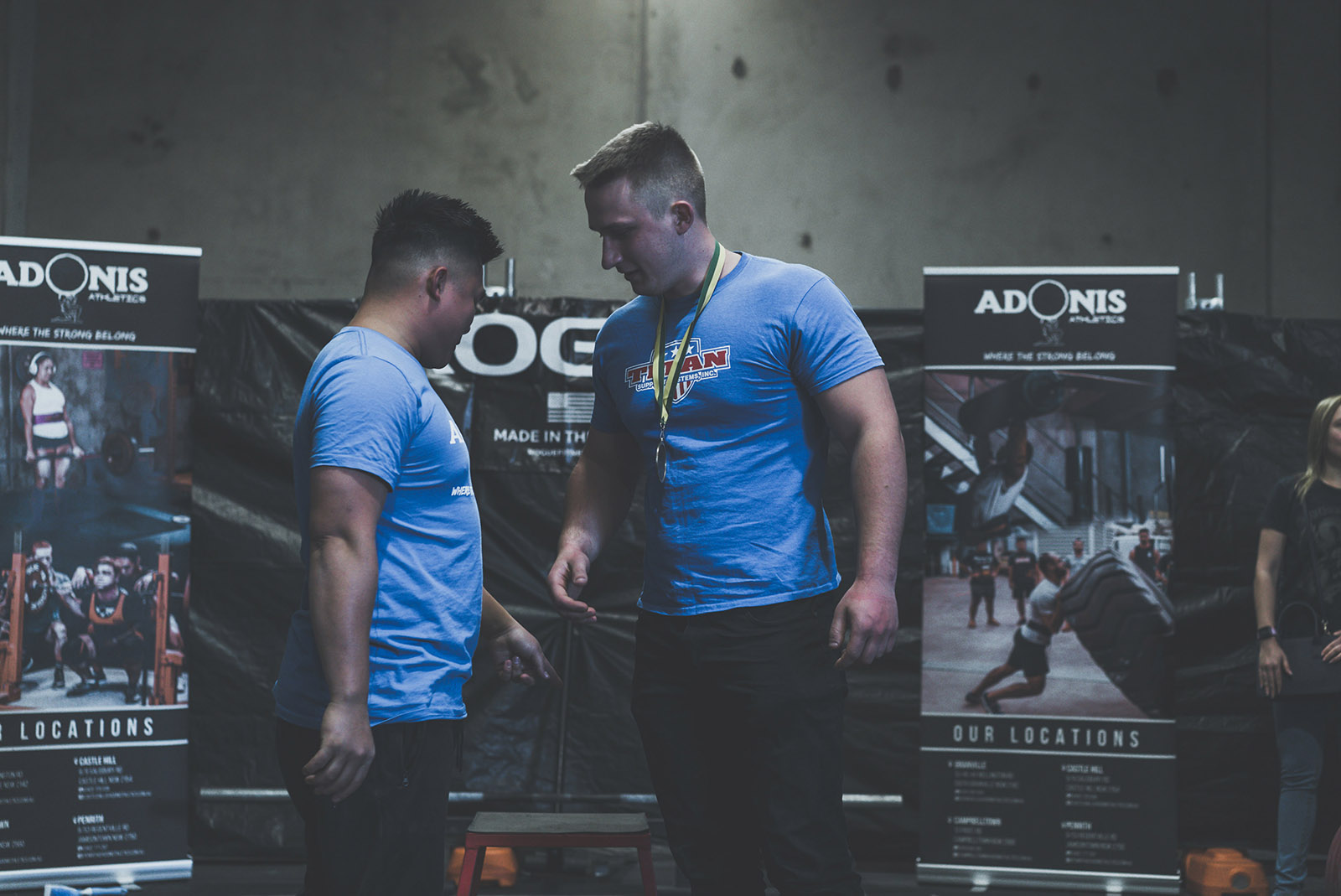 I did not feel like stepping on the Podium as it was only me competing in bench press only.

Don’t let my tales of woe put you off competing in powerlifting. Like any sport you have good days and bad days.

From this defeat I have learnt many a valuable lesson and I will use these to continue my future progress. This will probably be last bench press competition as a junior. Hopefully I have made all my rookie errors before I step up to the open competition.

I’d like to thank Australian Powerlifting Union, the boys at Sam’s Fitness, Adonis athletics and the people who came to support me. Without you I wouldn’t be able to be where I am today. Thank you! 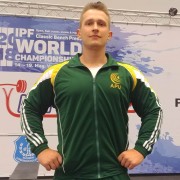 My name is Linas, I moved to Australia from Lithuania to study. I work part time at Sam's Fitness as a Digital Media Specialist which involves uploading and managing the content on the many platforms we operate on. So this combines my two passions - weight training and computers!

If you have any questions about bench pressing I am more than happy to share my Soviet era bench regimes - all the secrets from behind the Iron Curtain!